As an autocrosser, one of the most frustrating things is figuring out how to get your tires to the event when you own a car with a tiny trunk. I went the route of stuffing them in the front seat, but when I upped the fronts to 225/50s, that became a chore. I had a hitch, it was time to get a trailer.

I seriously considered buying one of the little trailers that I've seen pulled behind cars, but I wanted an enclosed trailer, so that wouldn't do. After pricing enclosed trailers, I decided against that...but then I looked at Donor Vehicle 3 in the back yard and got thinking...

Donor Vehicle 3 was involved in an unfortunate accident that destroyed the left front suspension and tweaked the cowl. It was a total loss and I had decided to part it out rather than fix it. Looking over the engine compartment, I realized there's a lot of room in there if you ditch the engine...and here's the tale. 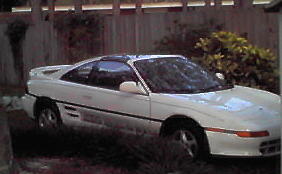 Here she is...doesn't look too bad, does it? Looks can be deceiving. The left strut rod was bent back and broken at one of the screws, the strut was bent, both front wheels were bent. The driver T-top wouldn't fit properly and the driver's door did not seat properly. Lots of frame work to get it back on the road....not worth it. 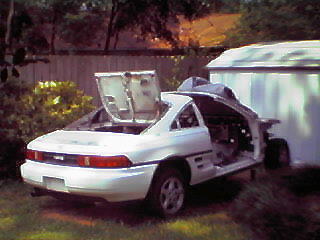 This is about six weeks after the first shot was taken. The interior is stripped and the front 18 inches of the car were cut off to revive another 91 I had. 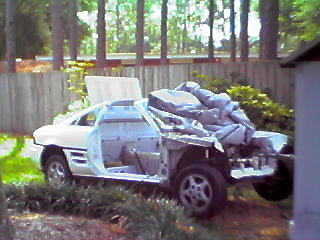 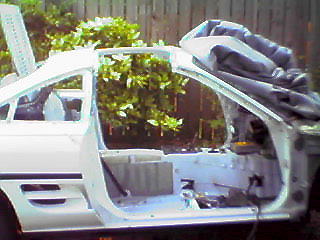 Before cutting the car in half, anything that ran from front to back had to be removed or set off to one side. I thought I got everything, but ended up missing the two smaller coolant lines (that explains why the tunnel gets so hot...) and brake lines. The Sawzall didn't mind, though :) 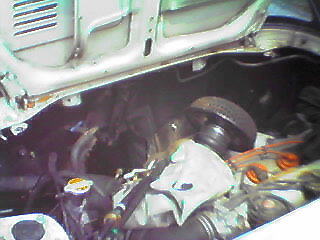 This is just to show that most items running through the tunnel were removed. Getting the gas tank out by yourself is fun...Not. 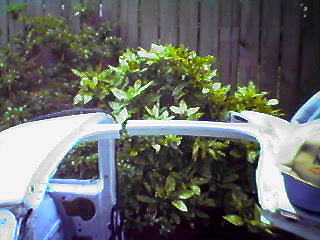 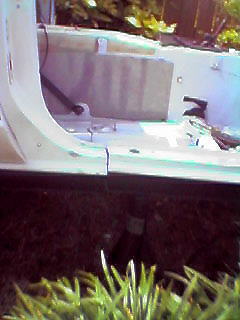 After the T top bar came the frame rails. Using a tip from a fellow MR2 owner (Thanks, Steve!), I cut one frame rail, then went to the other and slowly worked the two sides until the final cuts were in the middle. If you try to cut all the way across at once, the saw will bind and tear up blades. I was able to do this entire procedure on one used blade. 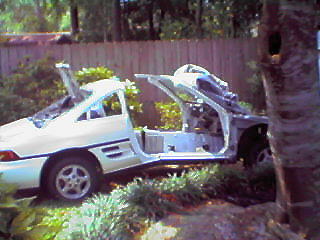 Once I started cutting into the tunnel, it really started to separate. I had put four jack stands under the frame rails of the car, but found that there is NO weight to the body of the car. It promptly tilted forward and off of the rear stands and I had to run and put one under the front trunk to hold the car up. 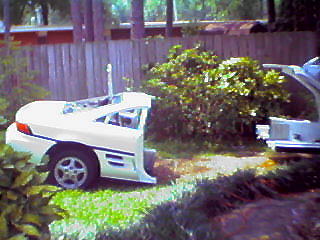 One final cut and it was free. The car had been sitting in my back yard for some time without moving and had settled a bit. I had to use the 85 (yep, the one with the rice boy stripe over the hood....that wasn't originally intended. It was a rust prevention measure gone horribly out of control) to pull it back out of the ruts. I then pushed it around the front of the house for final disassembly. 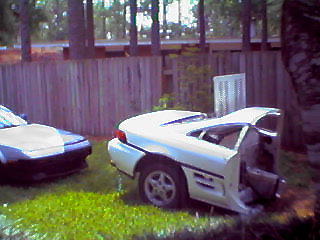 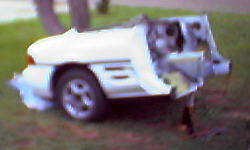 This horribly out of focus picture (the batteries in the camera were going and I couldn't find the fresh ones) is how the car looks now. I hacked off the roof to save the back window (one of these days, I'll get some piano wire and take it out) and put it behind the house. After that, I cut away the firewall (which has about 1/2 inch of thick hard black insulator between two panels). Then I stopped for the night. 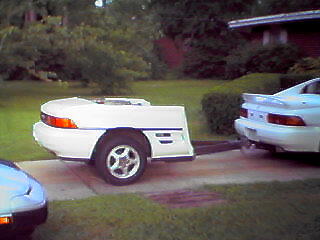 This is what it looks like now. I had a draw bar and floor welded in and got it in just good enough shape to use for the final round in the SCCA SEDiv Championship series. I then took it to Denver for the first ever National IMOC meet and Denver Solo Week. 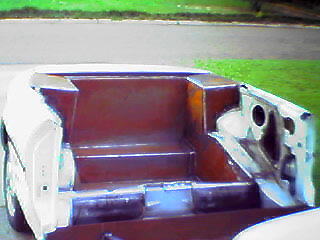 This is what the floor looks like. The strut towers were enclosed for a cleaner look, but boy, do they take up a lot of room. The tires JUST fit between the towers. Over the winter, all of the holes in the side panels will be closed off and a tonneau cover made. It pulls great, holds a lot of gear (with the trunk still intact, you also get some security) and attracts a lot of attention. If anyone is interested in having one of these, let me know. Mind you, it will not be cheap as a LOT of fabrication is involved.